Click here for the current broadcast schedule. New stations added as of 09/13/16

Three students will compete in one half-hour show. The student that places first in each of the shows will advance as finalists to compete in show four. All students will receive a scholarship according to their placement.

The three game show finalists will also receive a scholarship to attend HACU's 30th Annual Conference Oct. 8-10,2016, in San Antonio. Texas. The finalist will attend the Student Track and be recognized during HACU's Annual Conference.

Congratulations to the students from the participating institutions: 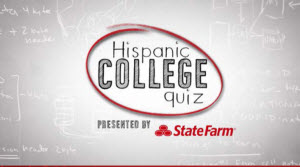