The Hispanic Association of Colleges and Universities kicked off its 36th Annual Conference, “Championing Hispanic Higher Education Success: Rebuilding a More Resilient and Inclusive America,” on Oct. 8, 2022, with more than 2,500 registrants. HACU President and CEO Antonio R. Flores welcomed participants to its first in-person conference since 2019 and presented a State of HACU Address.

The Opening Plenary celebrated two individuals for making outstanding contributions to Hispanic higher education with their induction into HACU's Hall of Champions.

Raúl Cárdenas was the founding president of South Mountain Community College, when HACU was founded in 1986. His institution became a HACU charter institution, and he served on the board of directors and chair in 1990-92.

He recalled the first Annual Conference of the Association in Albuquerque with fewer than 100 attendees. Cárdenas conveyed his amazement on the record attendance and the accomplishments of the Association through the years and said the past board member would be appreciative of HACU’s work.

“You’ve also played a significant role in the whole arena of higher education,” he said. “In the past there were no significant organizations to represent Hispanics as we have now,” said Cárdenas. “Today you have an advocacy growth - a very strong advocacy growth in the national arena, and that’s solely important.” He also gave credit to the founding president of the Association, Antonio Rigual for his passion and vision in creating the organization and the current leadership for expanding the Association.

At South Mountain Community College, Cárdenas was the first Hispanic and minority college president in the history of Arizona. As president, he helped create the Achieving a College Education Program, a nationally recognized scholarship program created in response to the high school dropout rate in South Phoenix among at-risk and underrepresented populations. Over the course of his career, he not only led two colleges, but he also sought to improve the field of higher education in his work with numerous regional and national associations. Cárdenas has earned accolades and support, garnering a national reputation for excellence in higher education.

Cárdenas also joined Flores on Oct. 9 as a panelist on “HSIs and Federal Legislation: 30 years of Advocacy and Success,” where the federal designation of Hispanic-Serving Institutions through the reauthorization of the Higher Education Amendment of 1992 was the focus of the discussion. The impact of this designation is over 5 billion allocated for HSIs over the past three decades.

Also inducted into the Hall of Champions was Senator Robert Menendez, senior U.S. Senator from New Jersey and Chairman of the Senate Foreign Relations Committee.

In a video message, Menendez expressed his appreciation for being inducted into HACU’s Hall of Champions. Menendez, who was the first in his family to go to college, spoke of the influence his mother had in his education and for believing in him. “She instilled in me the value of education, the key that unlocks the doors of opportunity in this country,” he said. “So today as I graciously accept this honor, alongside so many champions of education and opportunity, I feel as it has come full circle.”

Senator Menendez is co-chair of the first Senate HSI Caucus. As a proud alumnus of one of New Jersey’s leading Hispanic-Serving Institutions, he experienced first-hand the positive impact these institutions make in the lives of Hispanic students across the country by providing them with unparalleled academic and professional opportunities.

“Without HSIs, so many of our fellow Latinos would have been deprived of their birthright – A high-quality education that sets them up for success,” added Menendez. “Thank you for the work that you do on behalf of Latino students everywhere. Thank you for your commitment to making sure that each student can achieve their highest potential.”

A total of nine honorees will be recognized for their contributions to improving opportunities for college students during the three-day conference events. The awards will be presented during HACU’s 36th Annual Conference, October 8-10, 2022. 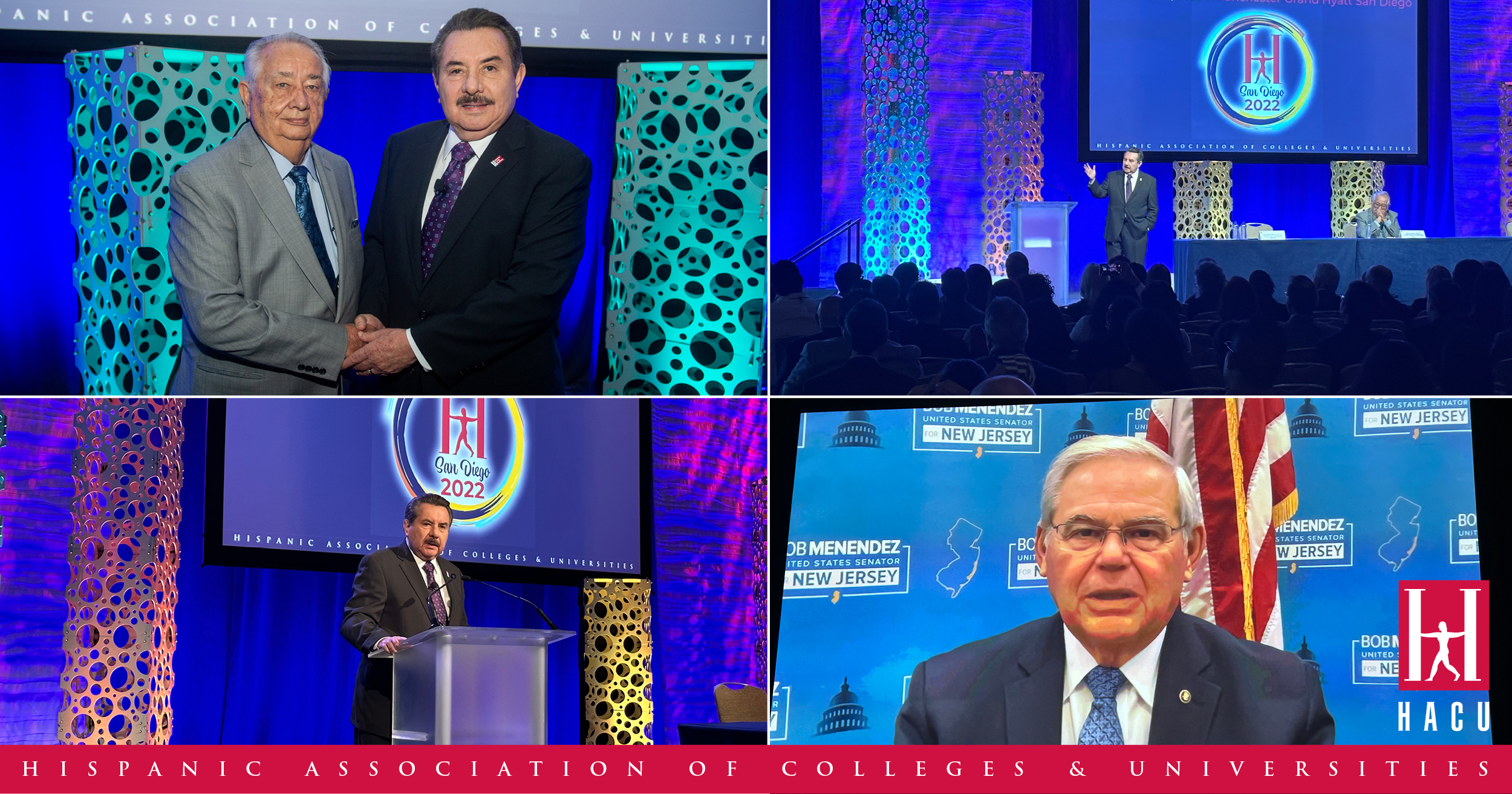