HACU's Position
HSIs are at the forefront of efforts to increase educational access and success for the nation's Hispanic population. HSIs represent 16% of all higher education institutions, yet serve 65% of all Hispanic students. Increased federal resources are needed to improve the educational attainment of Hispanics.

HSIs enroll an estimated two-thirds of today’s 3.5 million Hispanic college students, they also enroll more African Americans than all the HBCUs combined, more American Indians than all the TCUs together, and over 41% of all Asian Americans enrolled in college today.

Promising continued growth in the number of HSIs, there are 393 “emerging” HSIs with FTE student enrollments that are between 15.0-24.9 percent Hispanic. Due to rapid Hispanic population growth and the increasing numbers of Hispanics pursuing postsecondary education, most of these emerging HSIs are expected to become HSIs within the next decade.

Interactive Map
Click on the full-screen arrow above to view the interactive map that shows the HSIs in each state.

Economic Impact of HSIs
HSIs are a major contributor to the economic prosperity of the nation's engines of economic mobility. For example, of the top 10 colleges and universities ranked by the Social Mobility Index (SMI), nine were HSIs.

HSIs are engines of upward mobility for millions of students despite being financially disadvantaged when compared to other institutions of higher education. The data make a strong case for increased investment in institutions, especially HSIs that are meeting students where they are, and making good on the value of higher education for individuals, families, and communities.

Looking Forward
A federal grant program for Hispanic-Serving Institutions (HSIs) was first funded in FY 1995. Since then, Congress has been losing the race to keep up with their growing number. Even though over the 21 years of funding HSIs have received over $3.1 B from various dedicated sources of funding (HEA Title V—parts A & B, Title III—Part F, HUD, DOD and USDA), it is not proportional to the number of eligible colleges and universities, current and future enrollments of low-income and/or first generation students and the need at these institutions. 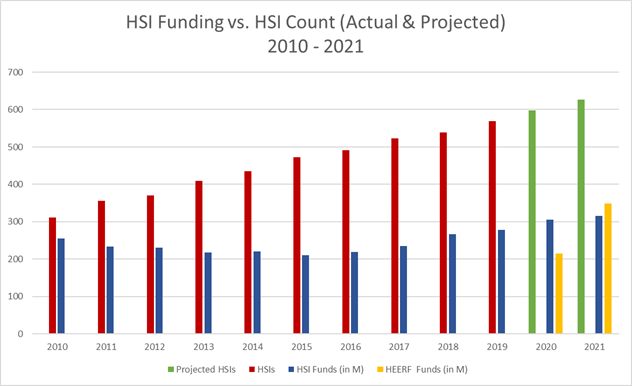 Enrollments for '20-'21 are estimated

As the above chart illustrates, federal funding grew in the early years (1998-2004) of Title V (the original and still linchpin HSI federal funding program), then leveled off from 2004-07 as the number of HSIs and Hispanic college students continued to grow. It increased dramatically in 2008 with the addition of the HSI STEM program, but since the Recession of 2009-10, it has actually declined while HSIs and Hispanic enrollments have increased even more rapidly. This situation needs to change if HSIs are to play their role in educating the nation’s workforce in this century.

One of the main challenges HSIs face as they address their critical role is persistent underfunding relative to other degree-granting institutions. According to 2016-17 IPEDS data, HSIs on average received $3,117 per student on average from all federal revenue sources, compared to $4,605 per student for all degree-granting institutions, just two-thirds the funding to educate a disproportionately low-income student population. The result is that HSIs only receive on average 68 cents for every federal dollar going to all other colleges and universities annually.

A significant increase in national investments is essential to help support the growing number of HSIs and their students. It is imperative that stakeholders join efforts to advocate on their behalf. Current fiscal conditions and political climate necessitate a targeted and consistent effort. If the nation is to meet its workforce needs for the rest of this century, it needs to commit to educational attainment of its Hispanic citizens.

Did you know?
HSIs only receive 68 cents for every dollar going to all other colleges and universities annually, per student, from all federal funding sources.