HACU's Position
Congress should direct NSF to appropriate $55 million for a competitive grants program to support HSIs in research, curriculum and infrastructure development, and for other purposes.

A 21st century workforce trained in science, technology, engineering and mathematics (STEM) fields is critical to our nation’s economic strength, social well-being and security. Hispanics, the nation’s largest ethnic population, comprise the fastest-growing sector of our U.S. labor force and 18 percent of the general population.

Many HSIs provide the baccalaureate foundation for Hispanic doctoral scientists and engineers, including five of the ten most productive institutions of future PhDs, a fact that has been recognized by the NSF. HSIs have the expertise, proximity and commitment to their students and communities to provide front-line leadership and support in the effort to close the gap and promote the graduation of more Hispanics with STEM degrees. However, many HSIs cannot successfully compete for existing NSF funds because they lack organizational support.

In the 2007, 2010, and 2017 America COMPETES Act, Congress authorized NSF to establish an HSI grant program to “enhance the quality of undergraduate science, mathematics, engineering and technology and to increase retention and graduation rates of students pursuing associate or baccalaureate degrees in science, mathematics, engineering, or technology.”

On May 4, 2017 as part of the FY 2017 Omnibus spending bill, Congress included $15 million in the Commerce Justice Science Appropriations bill (see page 44) to establish a NSF HSI infrastructure development grant program. The bill language stated: "...directs NSF to establish an Hispanic-Serving Institution (HSI) program at no less than $15,000,000 as authorized in 42 U.S.C. 18620-12. The agreement encourages NSF to use this program to build capacity at institutions of higher education that typically do not receive high levels of NSF funding." NSF now has both the program authority and specific funding to create the HSI program.

Improving Undergraduate STEM Education: Hispanic-Serving Institutions (HSI Program)
To enhance the quality of undergraduate STEM education at HSIs, the NSF established the HSI Program, in response to the Consolidated Appropriations Act, 2017 (P.L. 115-31) and the American Innovation and Competitiveness Act (P.L. 114-329). The HSI Program seeks to increase the retention and graduation rates of students pursuing associate or baccalaureate degrees in science, technology, engineering, and mathematics (STEM). 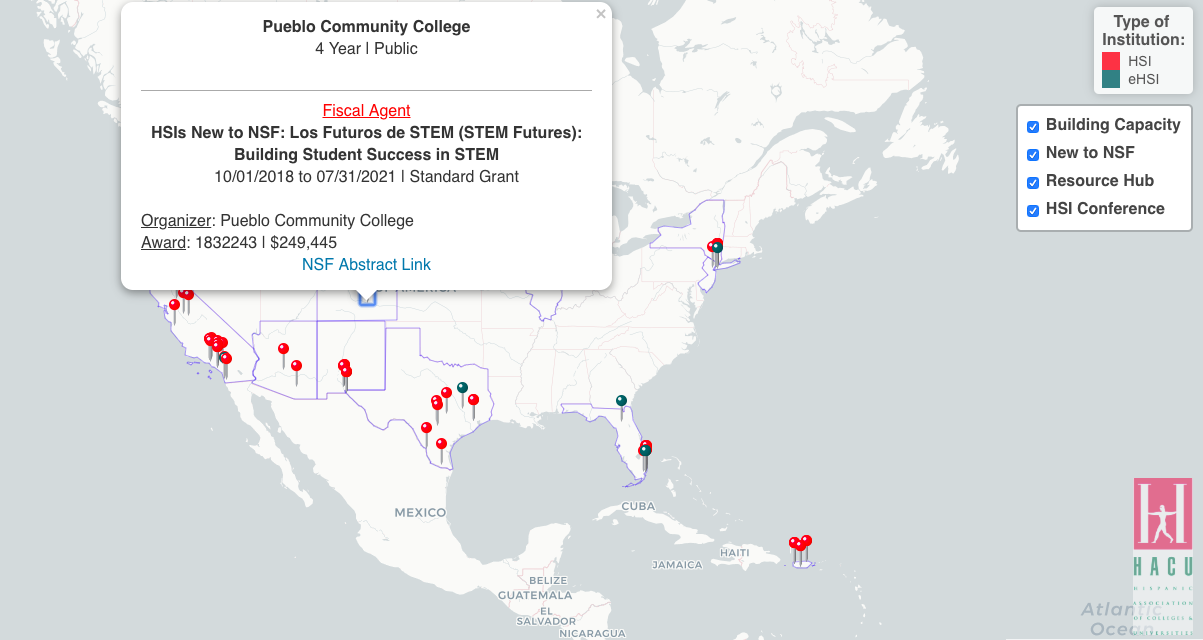 For complete details about the NSF HSI program click here.

Did you know?
More than 40.7 percent of Hispanic college students expect to major in science and engineering, compared to 37 percent of non-Hispanic whites.